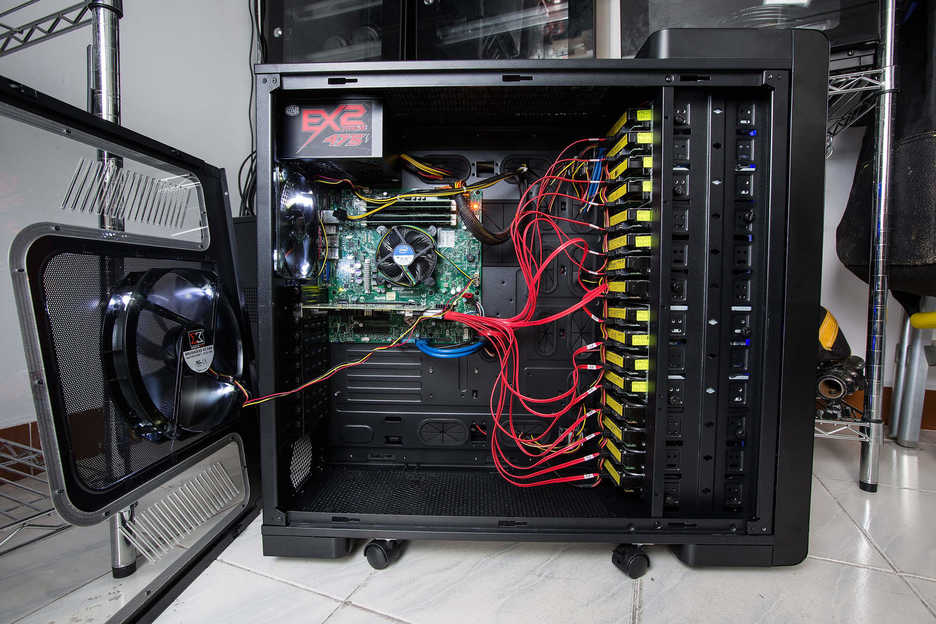 These are the hardware combinations I use with FreeNAS. I am currently running FreeNAS 9.10.x and have used most of the below hardware with earlier versions of FreeNAS 9 and 8.

Please note that only the first three systems listed use ECC RAM; I would have built the other systems using ECC components had I been aware of the risks inherent in running ZFS on non-ECC systems. ECC compatibility aside, IPMI is also a feature generally only available on server-grade motherboards which also support ECC; if you are building your own FreeNAS system (and why else would you have found this page?), do yourself a favor and look for a MB and processor with ECC support and IPMI.

The 16 hard drives are arranged in two vdevs comprising a single pool; one ZFS Raid Z2 vdev has ten drives while the other has six. This system started out with 10 drives; I added the six when I ran out of room. I ran out of space so have replaced the six drives in the smaller vdev with 4 TB drives (the server now has 10 3TB drives and 6 4TB drives).

This motherboard can accept two 8x HBAs if needed (I’m only using one slot at present).

This NAS is shown in the picture at top with an older power supply (which is noisy and inefficient…) and also here.

This motherboard’s PCI-e slots can accept two 8x HBAs; One of the 9211-8i HBAs went on the fritz; we replaced both 9211s with a single 9201-16i from the US. The faulty 9211 was a relatively inexpensive unit from Taobao, the mainland Chinese version of ebay, a venue know for occasionally listing a few counterfeit items.

This is a friend’s primary file server. Total storage space is just under 43TB. Picture below. 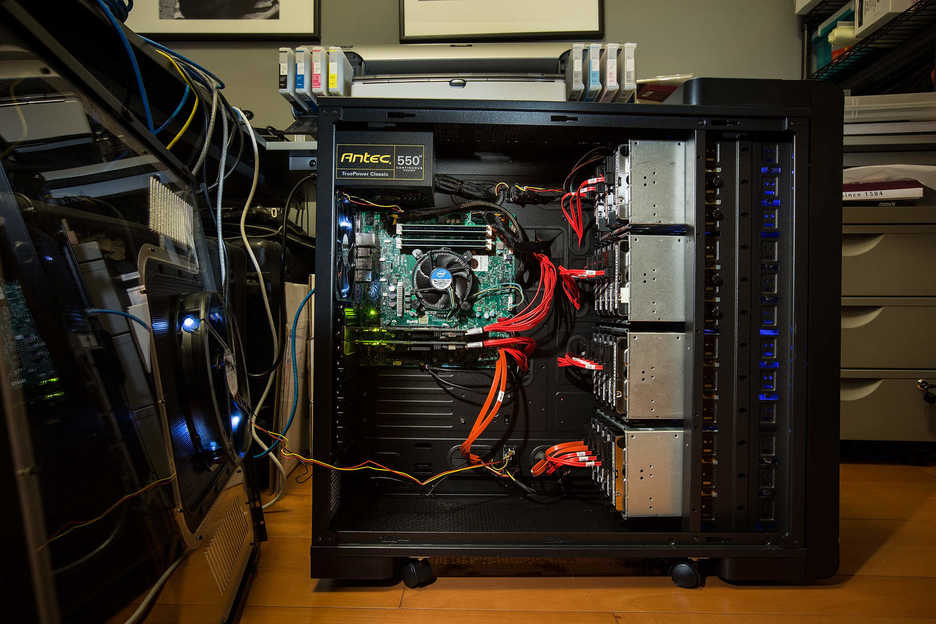 The 6 hard drives are arranged in a single RaidZ2 vdev.

This is a friend’s primary file server. Picture below. 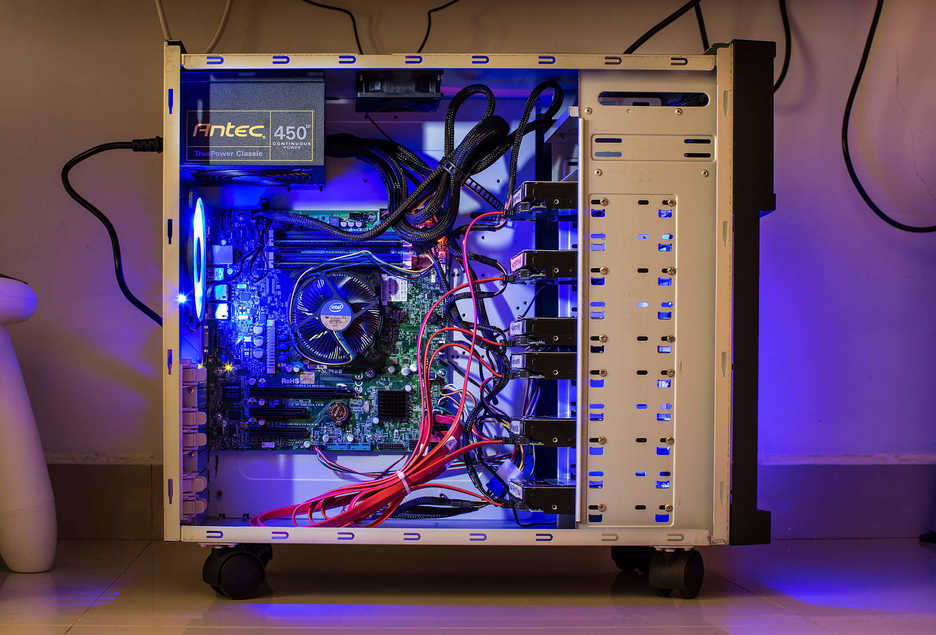 The first two PCI-e slots on this motherboard retain x8 speed with two devices installed (as is required two run two 9211-8i). It was the least expensive motherboard available at the time I bought it that would work with two 9211-8i.

The 18 hard drives are arranged in three ZFS Raid Z2 vdevs comprising a single pool. A while after this became a backup system, I decided to switch to only using 6-disk vdevs using leftover 2TB and 3TB disks plus 6 fresh 4TB drives.

This is a backup system (thus only 16GB ram). I didn’t know about ECC ram and server motherboards at the time I built it. 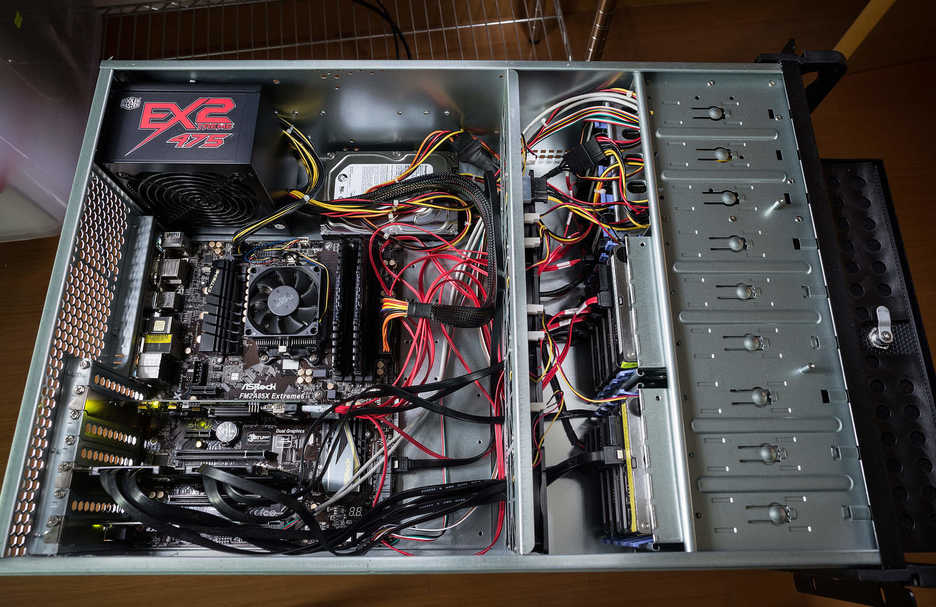 The 16 hard drives are arranged in two vdevs comprising a single pool; one ZFS Raid Z2 vdev has ten drives while the other has six.

The motherboard works well enough with the exception of the ethernet adapter, which can have issues with large sustained transfers (I don’t know if the culprit is the Atheros hardware itself, the FreeBSD drivers or what).

This is a friend’s secondary file server (we recently built a larger primary system using ECC server components). Picture below. I do not recommend cases with this design for holding hard drives: Both sides of the case must be removed to replace drives; cable routing is fraught; the hard drives need to be secured with screws in finicky little caddies… 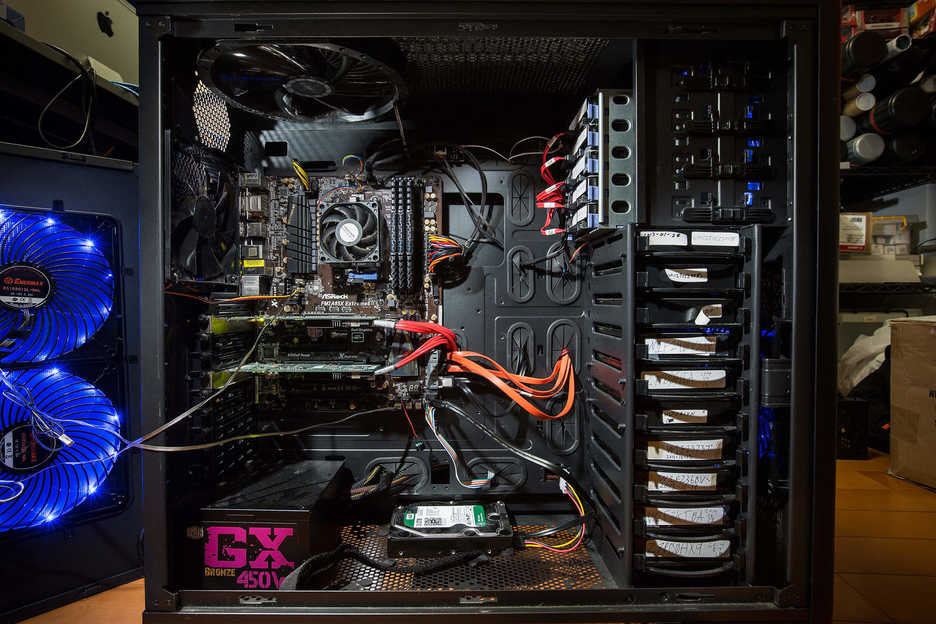 This is a system I helped a friend set up (and which has quickly has become too small, as I predicted). It is running FreeNAS 8.2 at present I believe.>

I don’t use all these motherboards at present but have in the past.

This is the best MB I have used; it takes ECC ram, has IPMI, and two of the PCI-e slots are fast enough to support most HBAs (one at x16, second at x8).

Works perfectly. Second PCI-e slot drops to x4 speed when both are in use (will support only one PCI-e HBA).

Works fine, with the exception of the ethernet adapter, which can cause problems with large transfers. 2 PCI-e slots retain x8 speed when both are in use, which is something that is extremely desireable with FreeNAS and difficult to find in comsumer boards.

A very odd choice for a NAS; I only used it temporarily when migrating a system. Can be used with two PCI-e HBAs thanks to the first two slots running at x8 when both are populated.

Works fine. The second PCI-e slot runs at x4 when both slots are populated (will not work with more than one PCI-e HBA).

This will run FreeNAS 8 but is rather slow with ZFS thanks to the RAM limit (4GB). It also can’t run drives larger than 2TB off the internal SATA 3Gb/s ports.

This board works fine with FreeNAS 8 and has a fair number of SATA 6Gb/s ports built-in. Expansion is essentially limited to one PCI-e board thanks to speed limits on the secondary PCI-e slots.

The rest of the CPUs I’ve used don’t support ECC RAM (and are therefore less than ideal):

It is a pain flashing this card to the IT firmware but once accomplished, it is fantastic. It is possibly the least expensive way to get 8 SATA 6Gb/s connections. The cards I’ve bought cost around US$100 new (in China).

The IBM Serveraid m1015 is apparently functionally identical to the LSI 9211-8i.

The 9201-16i works perfectly out of the box (without flashing) and is less expensive than two new LSI SAS 9211-8i from reputable dealers. It’s also the least expensive way I know of to get 16 ports out of a single PCI-e slot (if your MB only has one slot available that is 8x or faster).

This board is outdated at 3Gb/s but works okay with 2TB drives; it does not support larger disks.

The SAS ports are an older type that requires an SAS to SATA breakout cable that is now relatively obscure.

The approach I take with my own systems is to select drives with the lowest cost per gigabyte and longest warranty; at the moment, that means WD40EZRX (the 3TB disks may still be more economical in some places). I use WDIDLE3 on WD drives to adjust the head loading/unloading timer to 300 seconds.